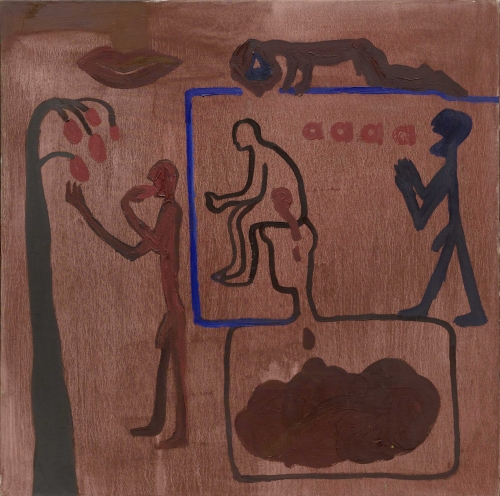 Michael Werner Gallery, New York is pleased to present an exhibition of early works by German artist A.R. Penck. Featuring important paintings and sculptures created in Dresden in the 1960s and early 1970s, the exhibition presents unique insights into the artist’s distinctive style and sensibility. This is the first comprehensive exhibition in the United States of Penck’s rarely seen early works in over two decades.

A.R. Penck’s mature style, characterized by brusquely painted signs and symbols rendered with an intense graphic impact, is by now recognizable to anyone familiar with the art that emerged in Europe during the post-war period. Penck’s reductive pictorial vocabulary and determinedly unfussy painterly style have made it all too easy for unsympathetic viewers to dismiss the artist as primitive or neo-expressionist. The exhibition at Michael Werner, focused entirely on important early paintings and the artist’s first sculptures, seeks to redress this by highlighting the surprising formal and conceptual origins of Penck’s oeuvre.

From the outset of his career Penck has pursued an intense interest in systems, whether political, informational or interpersonal, and the forces that govern them. His childhood interest in science fiction encouraged a deeper reading into the workings and implications of information theories and cybernetics. Penck’s prolific output during the 1960s and 1970s was driven primarily by his desire to create a universal pictorial system that could address the entire range of social and political issues facing modern man. This grand ambition ultimately led to the development of Penck’s Standart paintings and sculptures, a series for which the artist is best known.

Many of the works on view are modest in size, painted on board or cotton fabric or constructed from cardboard and paper. These are the only materials that would have been available to any self-taught artist working outside of the East German academic system. In these works one finds the beginnings of Penck’s highly personalized vocabulary: simple dots, lines and abstract forms are repeated throughout the works, as well as the stick figures that would appear in subsequent works for years to come. Despite their apparent humility, these works are charged with great vitality and an urgent sense of purpose, born of the artist’s need for communication over mere depiction.

Born Ralf Winkler in Dresden in 1939, Penck displayed prodigious artistic talent from an early age. At 16 he made the first of many applications to the art academies in Dresden and East Berlin. His paintings’ nascent political overtones and decidedly un-academic style earned him repeated rejection by the establishment. He adopted the pseudonym A.R. Penck in 1968 to counter persistent difficulties with East German authorities who had essentially banned the artist’s works from public exhibition. With the aid of friends in West Germany – notably, fellow artist Georg Baselitz and, later, Michael Werner – Penck smuggled works to Cologne, gaining his first exposure outside of the repressed East German state. Penck’s work garnered immediate attention. His first solo museum exhibition occurred in 1971 at Museum Haus Lange, Krefeld and the following year he participated in documenta 5 (he would go on to contribute major works to three subsequent stagings of this important international survey exhibition).

In 1975, though still a citizen of East Germany, Penck was awarded the prestigious Will Grohmann Prize of the Academy of Arts in West Berlin. Penck emigrated to the West relatively late, in 1980. He was a major figure in the groundbreaking exhibitions Zeitgeist (Martin Gropius Bau, Berlin, 1982) and New Art (Tate, London, 1983), events that confirmed his status as an important artist on an international scale. Today Penck is represented in public and private collections throughout the United States and Europe. His career now spans more than five decades during which he worked ceaselessly in painting and sculpture and as a writer and musician. He has presented numerous solo exhibitions worldwide including Kunsthalle Bern; Van Abbemuseum, Eindhoven; Museum Ludwig, Cologne; Gemeentemuseum, The Hague; The Irish Museum of Modern Art, Dublin; Museo Rufino Tamayo, Mexico City; Schirn Kunsthalle, Frankfurt; and Musée d’Art Moderne de la Ville de Paris. A.R. Penck lives and works in Dublin.

A.R. Penck: Early Works opens 9 June at Michael Werner in New York and remains on view through 2 September. The exhibition will be accompanied by a full-colour catalogue featuring a text by art historian Annabelle Ténèze. Gallery hours for June are Monday through Saturday, 10AM to 6PM, and Monday through Friday, 10AM to 6PM during July and August. For more information please contact the gallery at press@michaelwerner.com.