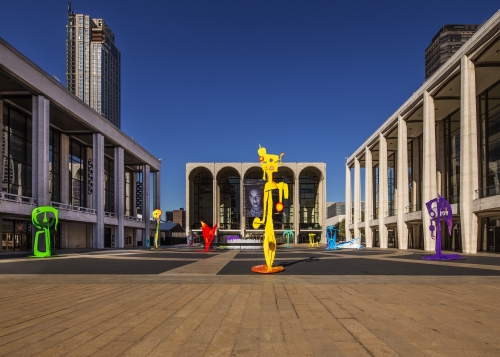 Michael Werner Gallery is pleased to announce the opening of Melt to Earth, fourteen monumental, site-specific sculptures by Los Angeles-based artist Aaron Curry that were commissioned by Lincoln Center. This major, public exhibition will be the first on the newly redeveloped Josie Robertson Plaza since Lincoln Center’s campus-wide revitalization and will be on view from 7 October 2013 through 6 January 2014.

Melt to Earth is Aaron Curry's most ambitious outdoor sculpture project to date. Working in response to the scale and architecture of Lincoln Center’s Josie Robertson Plaza, Curry created fourteen, large scale sculptures, some reaching eighteen feet in height, in brightly painted aluminum. Installed in orbit around the campus’s iconic Revson Fountain, these colorful works transform the plaza into a sculptural theater-in-the-round, creating an immersive environment for visitors to the arts complex. The artist describes his conception of Melt to Earth as an interactive installation meant to activate the Plaza as a performative space: “The sculptures echo what occurs on stage and can be understood simultaneously as characters and as being the setting for some event...Giacometti’s unrealized project for Chase Manhattan Plaza is something of a touchstone here, but so are the designs for theater and ballet of Picasso and Matisse.” Melt to Earth also echoes Alexander Calder’s 1963 sculpture "Le Guichet (The Box Office)", located on Lincoln Center’s Hearst Plaza.

Aaron Curry was born in San Antonio, Texas, and currently lives and works in Los Angeles. In 2010, he was awarded the Guna S. Mundheim Fellowship in the Visual Arts at the American Academy in Berlin. His works have been exhibited across the US and in Europe, including solo exhibitions at the High Museum of Art, Atlanta; Schinkel Pavillon, Berlin; Kestner Gesellschaft, Hannover; Galleria d'Arte Moderna e Contemporanea, Bergamo; and Ballroom Marfa, Marfa, TX. His works were featured prominently in the recent group exhibitions Alexander Calder: Form, Balance, Joy, organized by the Museum of Contemporary Art, Chicago, which traveled to the Nasher Sculpture Center, Dallas and Orange County Museum of Art, Newport; and Statuesque, organized by the Public Art Fund at City Hall Park, New York, which also traveled to the Nasher Sculpture Center.

Melt to Earth opens to the public 7 October 2013 and remains on view at Lincoln Center through 6 January 2014. For more information please call the gallery, email press@michaelwerner.com or visit michaelwerner.com.