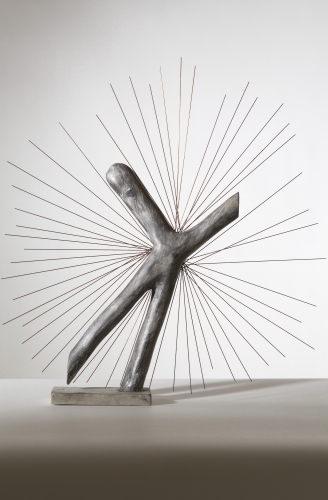 Michael Werner Gallery is pleased to announce an exhibition of new works by Enrico David. With a primary focus on sculpture, this is the artist’s second exhibition at the New York gallery.

Whether working in sculpture or painting, Enrico David posits various manifestations of figurative form. His process of conceiving an image is rooted in the line and he retains the impulsive and ephemeral nature of drawing as he transitions from sketches on paper to painting, sculpture and other media — often reverting back again to drawing — in ways that he refers to as “following instructions in order to formalize the feeling of bodily presence and absence, assembling and dissolving in equal measures.”

His work has often made reference to a wide spectrum of visual languages and a variety of techniques and traditions. From applied arts to paintings, aspects of graphic/industrial design and functionalism, the erratic nature of his work embodies the sense of impermanence, doubt and transformation that he considers implicit to the act of creating, both in its formal content and its potential for generating meaning.

The objects exhibited on this occasion maintain a consistency of medium — cast jesmonite or bronze  from original clay or wax modeling — and their scale and rendering reflect as much proximity to their original drawing source as possible. But at the same time they depict a melancholic, almost painful anthropomorphism directed at undoing viewers' desire for literal interpretation and understanding.

The artist describes these works as “appearing to be ridden with incompleteness: not fully formed — perhaps in order to narrow down the possibility of them being chanced upon by peril, or so burdened with detail that peril itself might just be put off and look elsewhere: displaced cavities, exposed networks of nerves, limbs, eyelashes, sculptural mass made lighter in places by subtraction. In the case of these sculptures this passage can be conceived as being simultaneously delicate and brutal, accommodating and defensive. Between these conditions there is simply a surge in which visibilities are assembled.”

Enrico David will be on view from 6 November 2014 through 24 January 2015 and will be accompanied by a full-color catalogue. Gallery hours are Monday through Saturday, 10 AM to 6 PM. For more information, please email press@michaelwerner.com.