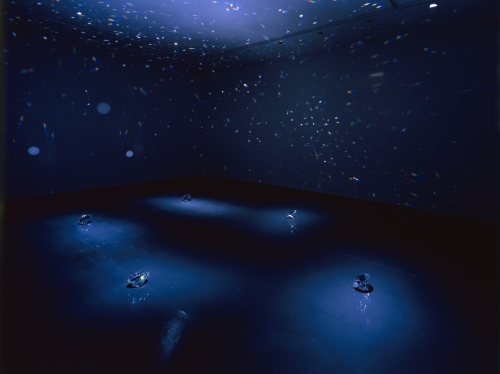 Michael Werner Gallery, London is pleased to present James Lee Byars: The Diamond Floor. This is the first time the work has been shown in the UK.

Originally created for Fondation Cartier pour l’art Contemporain, Paris in 1995, “The Diamond Floor” (1995) is a sculptural incarnation of “Five Points Make a Man”, a conceptual motif that appears in many of the artist’s drawings, sculptures and performances. For “The Diamond Floor”, five large crystal diamonds are placed on the floor in an arrangement that forms “a slightly compressed pentagon.” The shape implies a “man” as each diamond represents a head, two arms and two legs. The work is a manifestation of Byars’ love for ephemeral beauty, perfect form, and the apparent contradictions between the physical and spiritual.

“Five points make a man” is an idea Byars became increasingly fascinated with towards the end of his life. It is rooted in the minimal human forms which are present in his early sculptural works. The concept was also particularly relevant in two important “death” performances which took place in 1994. These were, “The Death of James Lee Byars”, performed at Galerie Marie-Puck Broodthaers in Brussels, and “The Death of James Lee Byars - Five Points Make A Man”, performed in public in Venice. In Brussels, the artist initially lay on the floor of the gallery and, after he had risen, he placed five crystals to indicate the body’s two legs, two arms and head; in the Venice work Byars substituted drops of water for the crystals.

James Lee Byars was born in Detroit in 1932 and studied art and psychology at Wayne State University. He presented his first museum exhibition in 1958, a legendary event that took place in the stairwell of New York’s Museum of Modern Art and lasted only one day. Over the following decade Byars lived and worked in Japan where he presented many performances and exhibitions, including “The Performable Square” in the National Museum of Modern Art, Kyoto, in 1962. In 1964 he was invited to present three performances at the Carnegie Museum of Art. Byars returned to America in 1967, dividing his time between New York and Los Angeles; by the 1970s he began to spend increasing amounts of time in Europe. Since that time Byars has been the subject of numerous gallery and museum exhibitions worldwide, including Stedelijk van Abbemuseum, Eindhoven; Kunsthalle Düsseldorf; IVAM Centre del Carme, Valencia; Castello di Rivoli/Museo d’Arte Contemporanea, Turin; The Henry Moore Institute, Leeds; and Fundaçao de Serralves, Porto. Byars died in Cairo in 1997. Important posthumous exhibitions include The Epitaph of Con. Art is which Questions have disappeared?, Kestner Gesellschaft, Hannover (1999); The Arts Club of Chicago (2000); Life Love and Death, Schirn Kunsthalle, Frankfurt and Musée d’Art moderne et contemporain de Strasbourg (2004); The Perfect Silence, Whitney Museum of American Art (2005); I’m Full of Byars, Kunstmuseum Bern (2008); The Perfect Axis, Schloss Benrath, Düsseldorf; and Klein Byars Kapoor, Musée d’art Moderne et d’Art Contemporain, Nice and ARoS Kunstmuseum, Århus, Denmark (2012-2013). In 2013, “The Figure of the Interrogative Philosophy” and “The Figure of the Question of Death” were included in the 55th Venice Biennale exhibition The Encyclopedic Palace, curated by Massimiliano Gioni.

Last summer, MoMA PS1 in New York presented “The Diamond Floor” in their exhibition, James Lee Byars: 1/2 an Autobiography, the most comprehensive survey of Byars organized in North America since the artist's death in 1997. Organized in cooperation with Museo Jumex in Mexico City, where it debuted in spring 2013, the exhibition features a selection of sculptures, fabric works, performable paper pieces, ink paintings, live performance and ephemera.

JAMES LEE BYARS: THE DIAMOND FLOOR opens on 23 June at Michael Werner Gallery in London and remains on view through 22 September. Gallery hours are Tuesday through Saturday, 10AM to 6PM. For more information please contact the gallery at press@michaelwerner.com.