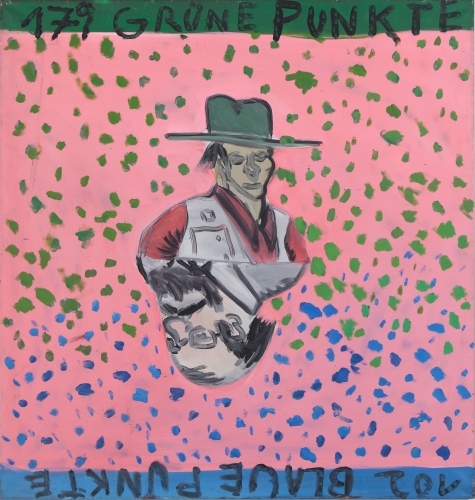 Michael Werner Gallery, New York, is pleased to present Jörg Immendorff: LIDL Works and Performances from the 60s. Featuring both paintings and objects, the exhibition will provide viewers with an opportunity to see a rarely-exhibited body of early work by one of the most important artists to emerge during the post-war period in Germany.

Jörg Immendorff (1945-2007) began his formal artistic training at the Kunstakademie Düsseldorf during a time when that city was developing into an international center for contemporary art. In 1964 Immendorff was admitted into the class of Joseph Beuys, then the most important artist working in Germany and a figure of profound influence for an entire generation of German artists. Immendorff's relationship with Beuys marked the beginning of an intensely productive period for the young artist, who was deeply affected by the Beuysian notion that art can and should play a wider role in society. Immendorff initiated groundbreaking work immediately upon his entry into the Beuys class, creating objects and actions which challenged the traditions of fine art and which increasingly came to address the pressing social and political issues of the day.

LIDL Works and Performances from the 60s illuminates Immendorff's formative years by focusing on the works and actions which he called LIDL. This phonetic invention, meant to mimic the sound of a baby’s rattle, was Immendorff's DADA-like contribution to the revolutionary fervor of the 1960s. Immendorff, like many students of the time, was fiercely opposed to the war in Vietnam and he began his LIDL activities as a series of specific actions spurred largely by anti-war sentiment. LIDL Works and Performances from the 60s presents the seminal objects and performative works from Immendorff's most visible LIDL actions. The exhibition also examines Immendorff's application of the LIDL concept to challenge political institutions domestically, as with his formation of an independent “LIDL-Academy” within the Kunstakademie Düsseldorf (1968) and the attempted addition of a “LIDL-Room” to the parliamentary in Bonn (1969). These events, and the paintings and objects related to them, are important works in the context of their turbulent time and outline the trajectory of Immendorff’s subsequent work, which henceforth was concerned with the role of the individual in contemporary society and within history at large.

LIDL Works and Performances from the 60s opens on 16 March at Michael Werner Gallery in New York and remains on view until 13 May.  The exhibition will be accompanied by a full-color catalogue featuring a text by Harald Szeemann. Gallery hours are Monday through Saturday, 10AM to 6PM. For more information, please contact the gallery at press@michaelwerner.com.