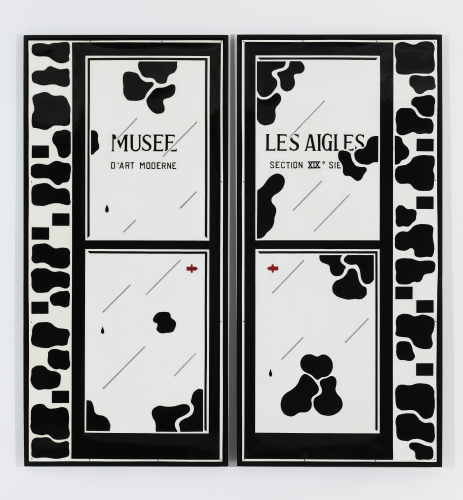 Michael Werner Gallery is pleased to present an exhibition of major works by Marcel Broodthaers, one of the most important artists of the last century.

Born in Brussels in 1924, Broodthaers began writing poetry at an early age and was associated with the surrealist movement in his native Belgium. For nearly two decades he continued to write, struggling in poverty and obscurity, before turning to the visual arts at the age of forty; he explained in the catalog for his first exhibition, in 1964: "I, too, reflected whether I might not sell something and find some success in life..." His first artwork, Pense-Bête, consisted of several copies of his final volume of poems embedded in a mound of plaster. Embodied in this dramatic gesture are the concerns that would fascinate Broodthaers for the rest of his artistic career: an unending interest in wit and wordplay, coupled with an affectionate critique of the conventions of contemporary art and its institutions. Broodthaers died in Cologne in 1976, leaving behind an immensely rich and influential body of work that continues to speak to subsequent generations of artists.

The exhibition at Michael Werner brings together a selection of major works from throughout Broodthaers's relatively brief career. Highlights include "Dites Partout Que Je L'Ai Dit (Say Everywhere What I Have Said)", a work exhibited only rarely since its creation over three decades ago. Conceived and first exhibited by Broodthaers as a room for his 1974 exhibition Eloge de Sujet at Kunstmuseum Basel, it is considered one of the most important of Broodthaers' installations, encapsulating his practice through a playfully provocative juxtaposition of word and image, poetry and object, language and art. Also included in the exhibition are a major mussel panel and one of the only paintings of the artist.

Marcel Broodthaers: Major Works is on view from 9 September through 13 November. Fall gallery hours are Monday through Saturday from 10am until 6pm. Please contact the gallery at press@michaelwerner.com for more information.