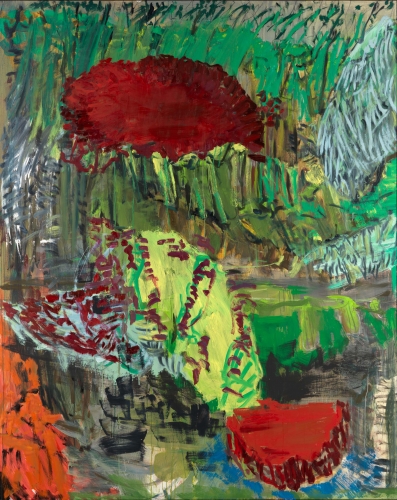 Michael Werner Gallery is pleased to present an exhibition of new paintings by Danish artist Per Kirkeby (b. 1938).

The artist's recent paintings explore relationships between nature and abstraction, returning to landscape motifs as a source for painterly invention. In several works horizontal bands suggesting wood planks predominate the picture space to create multiple horizon lines which alternately reveal and obscure underlying passages of loosely gestural forms, reminiscent of tree stumps. In other works, elusive planes of shadow and light emerge independent of a fixed horizon, further confusing our expectations of front and back, above and below. Kirkeby's palette too contributes to the disorienting effect of these works; employing a range of hot, brash colors not typically found in his paintings, Kirkeby complicates a purely naturalistic reading of the paintings to expand the expressive potential of his pictorial abstraction.

Throughout a career spanning four decades Per Kirkeby has developed a unique approach to abstract painting, quietly and deliberately building a personal vocabulary of images steeped in observations of the natural world. Ideas about landscape, sedimentation, and layers are the key elements in Kirkeby's art, which have their roots in his study of the natural sciences at the University of Copenhagen, beginning in 1957. During this time Kirkeby made numerous expeditions to the Arctic and Greenland, experiences that would become the foundation for his later works as a visual artist. Already by the time he earned his master's degree in arctic geology in 1964 Kirkeby had immersed himself in the activities of Copenhagen's Experimental Art School, participating in happenings and Fluxus events with Nam June Paik, Joseph Beuys and Jörg Immendorff among others. In 1965 Kirkeby presented his first solo exhibition and published his first volume of poetry. His first exhibition with Galerie Michael Werner, Cologne, was in 1974.

Per Kirkeby has been the subject of exhibitions throughout Europe and the United States. The artist represented Denmark in the 1976 Venice Biennale and later participated in Documenta VII and Documenta IX. Since that time major exhibitions of his works in a variety of media have been presented by Kunsthalle Bern; Castello di Rivoli, Turin; Whitechapel Art Gallery, London; Museum Ludwig, Cologne; Musée d'Art Moderne de la Ville de Paris; and the Arts Club of Chicago, in an exhibition that explored latent architectural motifs in the artist's paintings, drawings and sculptures. Recent retrospective exhibitions were presented by the Louisiana Museum of Modern Art, Humlebæk in 2008 and Tate Modern, London in 2009. In 2012 BOZAR Centre for Fine Arts, Brussels, will present Per Kirkeby and the Forbidden Paintings of Kurt Schwitters, examining Schwitters's Norwegian landscapes of the 1930s - what Kirkeby has characterized as "the forbidden paintings, the ones that did not correspond to 'history'" - as an important source for Kirkeby's own development as a painter.

Per Kirkeby: New Paintings is on view from 15 September through 29 October. A full-color catalogue featuring a text by the artist accompanies the exhibition. Gallery hours are Monday through Saturday from 10AM to 6PM. Please contact press@michaelwerner.com for more information.