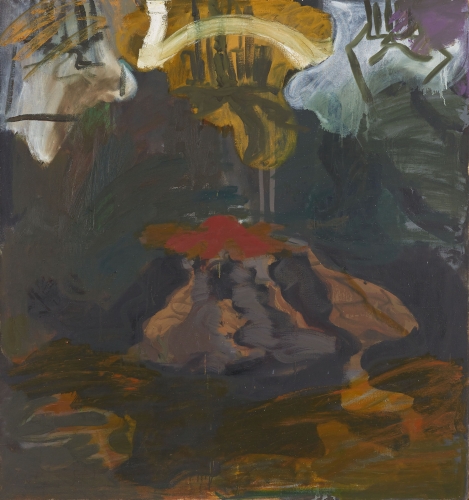 Michael Werner Gallery, New York is pleased to present an exhibition of works from the 1980s by Per Kirkeby. With a selection of more than twenty paintings and bronze sculptures, this exhibition explores an important period in Kirkeby’s oeuvre, one which has not previously been shown in such depth.

The foundational importance of the natural sciences to Kirkeby’s painting is well established: the artist traveled extensively in the Arctic and Greenland in the early 1960s while working towards his master’s degree in geology. Equally important to his development as a painter are the many experiments with architecture and performance Kirkeby carried out during his student days and into the 1970s. At Copenhagen’s Experimental Art School, several of Kirkeby’s Fluxus-inspired activities seized upon notions of shelter and the interrelationship of interior and exterior spaces, both natural and man-made. The brick became an important pictorial and sculptural device in Kirkeby’s paintings and performances and eventually led the artist to complete his first outdoor brick sculpture in 1973. Kirkeby’s concurrent travels in Central America exposed him to Mayan art and architecture, further intensifying his interest in the possibilities of structural form. The artist’s paintings and sculptures of the 1980s are the distillation of these experiences. Created with a new conceptual focus on recurring motifs, this body of work further develops Kirkeby’s fascination with the intersection of abstraction and the natural world. The expressive possibilities of light and form are expanded through Kirkeby’s personalized vocabulary of natural and architectural imagery.

Per Kirkeby is one of the most important artists of his generation. His first exhibition coincided with the completion of his studies in geology, in 1964. Kirkeby represented Denmark in the 1976 Venice Biennale and later participated in documenta VII and documenta IX. Important solo museum exhibitions include Van Abbemuseum, Eindhoven; Kunsthalle Bern; Whitechapel Art Gallery, London; Museum Ludwig, Cologne; Louisiana Museum of Modern Art, Humlebæk; Tate Modern, London; BOZAR Centre for Fine Arts, Brussels; and most recently the Beaux-Arts de Paris. A major retrospective of painting and sculpture was organized by The Phillips Collection in Washington, DC in 2012, which later traveled to the Bowdoin College Museum of Art, Brunswick. Works by Kirkeby are found in many museum collections worldwide including Tate, London; Centre Pompidou, Paris; Metropolitan Museum of Art, New York; and Museum of Modern Art, New York, among many others.

Per Kirkeby: Paintings and Bronzes from the 1980s opens 28 February at Michael Werner Gallery in New York and is on view through 5 May 2018. The exhibition will be accompanied by a full-color catalogue featuring an essay by Peter Schjeldahl. Gallery hours are Monday through Saturday, 10AM to 6PM. For more information please contact the gallery at press@michaelwerner.com.