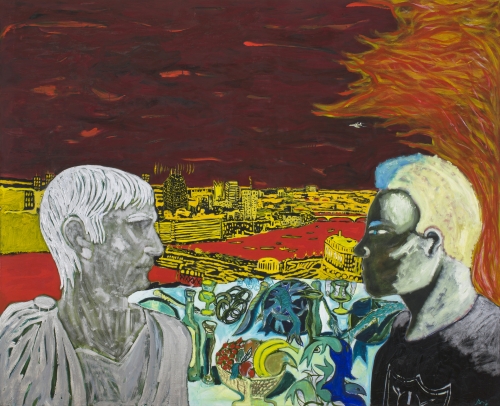 Michael Werner Gallery, London is pleased to present an exhibition of early works by Peter Doig. The exhibition presents a comprehensive overview of Doig’s formative works from the 1980s and includes several paintings and drawings shown for the first time.

In a career spanning three decades Peter Doig has established himself as one of the most inventive and accomplished artists working in painting today. Earning international critical recognition in the early 1990s, Doig reshaped the discussion around painting at a time when many artists and critical thinkers preoccupied themselves with rumors of its death. Obsessed with the evocative potential of paint and decidedly pictorial in appearance, Doig’s work embraces the recent history of abstraction, broader traditions of narrative painting and contemporary popular culture. His inventive approach to the language and medium of painting, coupled with a use of photography and cinematic sources, has allowed Doig to create some of the most resonant images in contemporary art. Then as now, his singular approach to painting amounts to a thorough reimagining of the medium's potential for depth and meaning.

The roots of Doig’s painterly revival are deep and varied, as his works from the 1980s demonstrate. Created shortly after the artist settled in London, these early works show Doig mining various sources and painterly traditions and experimenting with a range of techniques. The Hairy Who and Chicago Imagists, along with artists as diverse as Miro, Chagall and A.R. Penck, are revealed as major touchstones for Doig and are evoked in his light touch and unexpected, often jarring, palette. Pop Art and popular culture are present as well, and it is in these works that one sees the emergence of cinematic imagery and the concept of the recurring motif - elements essential to Doig’s practice today. As this exhibition makes clear, Doig is a sophisticated visual thinker endlessly fascinated with the process and history of painting.

No Foreign Lands, a major exhibition surveying recurrent motifs in Doig’s paintings and drawings from 2000 to the present, was presented in 2013 at the Scottish National Gallery, Edinburgh and is currently on view at the Musée des Beaux-Arts de Montreal.

Peter Doig: Early Works opens 20 March at Michael Werner Gallery, London, and remains on view through 31 May 2014. The exhibition is accompanied by a fully illustrated catalogue with a text by Dr. Richard Shiff. For more information please email press@michaelwerner.com.