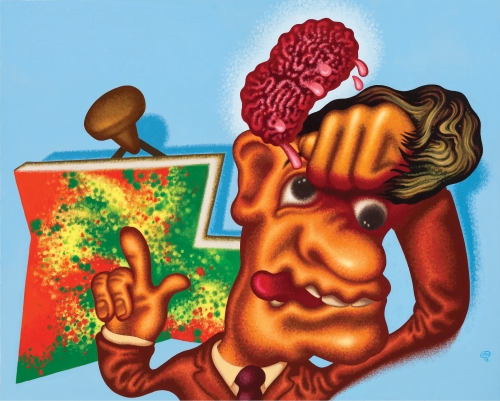 Michael Werner Gallery, London, is pleased to present Some Terrible Problems, an exhibition of new paintings by American artist Peter Saul. This is the first London exhibition by Saul, who remains a vital presence in American painting through more than fifty years.

Peter Saul was born in San Francisco in 1934. Following his studies at the California School of Fine Arts and Washington University, St. Louis, he settled for six years in Paris, an unusual choice for a young artist at a time when New York City was the place to be. Saul has remained something of an outsider ever since. Neither a believer in the promise of abstraction, nor a disciple of the Existentialist philosophies underlying the artspeak of the day, Saul remained true to his personal influences and obsessions: French academic painting, MAD magazine, artists such as Paul Cadmus and Rosa Bonheur. Saul embraced narrative and figuration in painting when painting was supposed to be non-objective (if one didn’t already believe painting to be dead). His ironic and caustic humour, love of the grotesque and dogged insistence on the necessity of a picture to tell a story, have left him at odds with every dominant style and “-ism” of the past five decades. Saul has developed into a profound history painter whose ambivalent politics and lurid imagery further complicate the reception of his painting. Consequently, he has long existed outside the canon of acceptable contemporary artists, a radical fringe figure who nonetheless exerts profound influence on younger artists.

In 1967, Saul said, “Not to be shocking means to agree to be furniture”. This statement outlines the exceptional attitude with which Saul gleefully skewers the conventions of world politics and culture. “Pictures with problems” are Peter Saul’s abiding interest. Some Terrible Problems features seven new large-scale canvases, each dissecting to humorous, gruesome and often offensive effect a range of subjects and attitudes. These remarkable new works revisit genres of history painting and portraiture while remaining thoroughly contemporary and visually unlike anything else in recent painting.

Some Terrible Problems opens 23 September at Michael Werner Gallery in London and is on view through 5 November. The exhibition will be accompanied by a full-colour catalogue featuring an interview between Peter Saul and artist Joe Bradley. Gallery hours are Tuesday through Saturday, 10AM to 6PM. For more information please contact the gallery at press@michaelwerner.com.