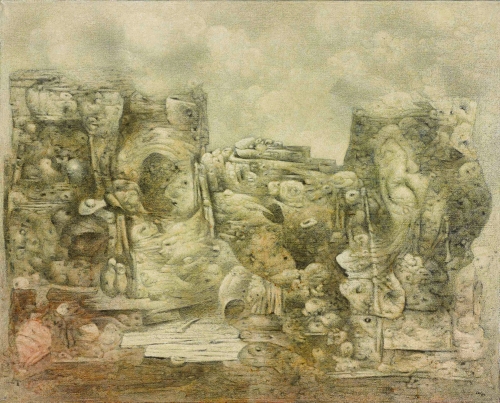 Michael Werner Gallery is pleased to announce an exhibition of works by the German painter Richard Oelze (1900-1980). A reclusive and visionary artist who participated in major international exhibitions of his time, Oelze is now lost to the broader art historical consciousness. This exhibition will feature more that thirty paintings and drawings and will also include the generous loan of one of Oelze’s most important works, his 1936 canvas “Expectation”. Acquired by the Museum of Modern Art in 1940, this major painting was lauded by Alfred Barr as an exceptional contemporary work on par with the genius of Edvard Munch.

Richard Oelze’s artistic career began in the 1920s, immersed in the Bauhaus in Weimar where his mentors included Oskar Schlemmer and Johannes Itten. Always a solitary and enigmatic figure, Oelze lived an eccentric and peripatetic existence, making numerous sudden trips by train to Berlin, Hamburg, Leipzig, Cologne and Düsseldorf. He lived in Dresden from 1926 to 1929, returned briefly to his studies in the Bauhaus at Dessau, and continued for several years to move throughout Germany, surviving by the occasional sale of work. In 1933 he moved to Paris. He worked feverishly and exhibited his paintings with the major Surrealist painters, becoming something of a legend among his peers. On the recommendation of Paul Éluard, Alfred Barr visited Oelze in 1936 while preparing the exhibition Fantastic Art, Dada, Surrealism for the Museum of Modern Art and acquired works from the artist for the museum’s collection. From Paris, Oelze traveled in Switzerland and Germany before being conscripted into military service in 1940. He was captured by the Americans, interned in a camp and ultimately returned to civilian life in 1945.

Following the war, Oelze gradually returned to painting, living in the poorest conditions. For two decades, Oelze lived in solitude in an undertaker’s storage room in Northern Germany, in a small town near Bremen. In 1960 Oelze was included in the exhibition Surrealist Intrusion in the Enchanters' Domain, organised by André Breton and Marcel Duchamp at the D'Arcy Galleries in New York City. Renewed attention led to a solo exhibition at Museum Karl-Ernst-Osthaus, Hagen in 1961. In 1964 Oelze was awarded the Karl-Ernst-Osthaus and Prize of the City of Hagen and the Burda Prize in Munich. Also that year, Kestnergesellschaft, Hanover, organised a large retrospective exhibition which traveled throughout Germany and was accompanied by a major catalogue of Oelze’s work, which included a text by Alfred Barr. Oelze continued to live and work in Germany until his death shortly before his eightieth birthday.

While surrealist artists like Hans Bellmer and Max Ersnt also came from Germany, Oelze is distinguished from his compatriots in that he created much of his most important work within his home country. Despite his constant travels, Oelze maintained a deep bond with the forest landscape of his German homeland. His work is an extension of German Romanticism as epitomised in the work of Caspar David Friedrich. Oelze’s imagery, however fantastical, grotesque or abstract, is always grounded in landscape. His painterly technique comprised an uncanny combination of old master exactitude with the improvisatory gestures of transfer and frottage. Oelze’s anthropomorphic landscapes are pervaded by a dark mood of existential alienation.

Few of Oelze’s early works survive; he is believed to have destroyed as much as two-thirds of his life’s work. The artist’s distinct approach to painting unfolded over his lifetime and largely without outside influence. Toward the end of his life, Oelze recalled his reaction on his first encounter with Surrealism, in 1929: “My painting style didn’t need to change. It was just a confirmation that let me believe in myself a little more…”

Richard Oelze: 1900-1980 opens 19 January at Michael Werner Gallery in New York and is on view through 11 March 2017. The exhibition is accompanied by a full-colour catalogue. Gallery hours are Monday through Saturday, 10AM to 6PM. For more information please contact the gallery at press@michaelwerner.com.