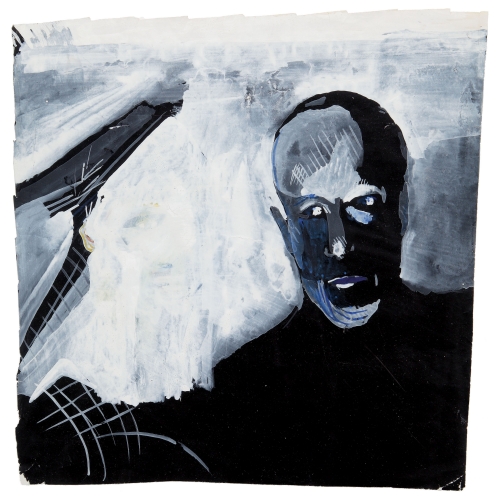 Michael Werner Gallery, London, is pleased to present an exhibition of early works on paper by Sigmar Polke. This is the largest and most comprehensive exhibition in London of Polke’s works on paper in just over a decade. The exhibition features nearly 100 works, many of which are being exhibited for the first time. Sigmar Polke is widely regarded as one of the most important and influential artists of the Post-War period. Throughout a career spanning five decades, Polke repeatedly questioned art history and the conventions of painting with intelligence, wit and an uncanny sensitivity to materials. His unique artistic sensibility has its roots in the turbulent years following World War II in Germany. Like many artists of his generation, Polke adopted a critical stance in his work, forced as he was to reconcile the horrors of his country’s recent past with growing prosperity and consumerism amidst the lingering effects of war. Polke’s singular achievement was to explore his social situation with humor and skepticism, avoiding didacticism and remaining intensely experimental. This attitude is most clearly evident in the artist’s early drawings.

The iconographic and technical range of these early drawings is astounding, demonstrating a stylistic diversity unmatched by Polke's contemporaries. All of the works are intimately scaled, many originating in the artist’s copious sketchbooks. Ballpoint pen, marker, pencil, watercolor, gouache and collage are among the numerous materials Polke freely employed in his early drawings, which became the foundation for much of his later work in painting and sculpture. The drawings range from spontaneous notations to fuller, more painterly works. In these drawings the artist offers wry interpretations of advertising imagery, logos and consumer items; fanciful depictions of real and imaginary objects, including studies for sculptures; and hallucinatory compositions synthesizing abstraction, portrait and landscape. Motifs from many of Polke’s major paintings emerge in these drawings, offering viewers a point of entry into the artist's conceptual processes and complex oeuvre.

Sigmar Polke was born in 1941 in the former East Germany. He was raised near Düsseldorf and enrolled in the art academy there at the age of twenty; his fellow students included Jörg Immendorff, Blinky Palermo and Katharina Sieverding, among others, under the tutelage of Joseph Beuys. Always an experimental and prolific artist, Polke worked primarily in painting and drawing throughout the 1960s. He increasingly turned to photography and film in the following decade, experimenting as well with sculpture and performance, before gradually returning again to painting in the 1980s. Polke participated multiple times in documenta and the Venice Biennale and has been the subject of numerous major museum exhibitions worldwide. He was the recipient of several prestigious awards and honors, including the Roswitha Haftmann Prize, Zurich (2010) and the 11th Rubens Prize, Siegen (2007), among many others. In 2008, Polke was elected an Honorary Member of the American Academy of Arts & Sciences.

This winter the Tate Modern in London will present Alibis: Sigmar Polke 1963-2010, the first exhibition to survey the artist's works across all media from throughout his career. With approximately 300 works, including many never before seen in the UK, this constitutes one of the largest exhibitions ever organized at the Tate Modern since his solo show Sigmar Polke. History of Everything: 1998-2003. Earlier this year, the exhibition was presented at MoMA, New York and will open in March at Museum Ludwig, Cologne.

Sigmar Polke: Early Works on Paper opens 5 February 2014 at Michael Werner Gallery and remains on view through 18 April 2015. Gallery hours are Tuesday through Saturday, 10AM to 6PM. For more information please contact the gallery at press@michaelwerner.com.