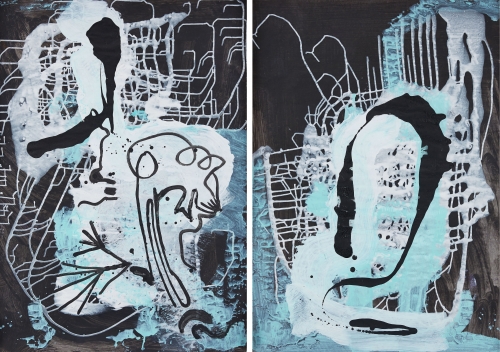 Disregard for aesthetic conventions, an embrace of the endless possibilities of experimentation, and a persistent ironic humour are the hallmarks of Sigmar Polke’s life and work. His profoundly inventive output of paintings, objects, photographs and films challenged received notions around the role and meaning of art, making Polke one of the most important and influential figures of the post-war period. Polke is best known for his work in painting, a medium he navigated with a broadly experimental attitude toward content and materials. Invented and borrowed imagery, abstraction, transparent surfaces and deconstructed supports, paintings created with smoke, powdered metals, chemicals and resins: Polke relentlessly questioned the meaning and potential of painting over the course of his 50-year career.

The transformative potential of materials, both physical and metaphorical, was Polke’s constant obsession in painting. His longstanding interest in alchemical practices led to deeper investigations of the optical effects of pigments and minerals in paint. A fascination with “higher powers” and an acceptance of the importance of accident within his practice also held special meaning for Polke. These material and conceptual interests brilliantly combine in the Pour Paintings, a group of mostly large-scale works on paper with which the artist was engaged over a period of roughly 15 years. The Pour Paintings are typified by evocative skeins of poured iridescent paint floating in a flat, void-like black ground and sometimes augmented with deliberate representational imagery. Powdered mica and other materials suspended in the viscous paint create illusions of shifting light and space, perceptions of which change depending on the viewer’s relation to the picture plane. As a discrete group of works, the Pour Paintings illustrate with surprising economy and elegance the key concerns of Polke’s aesthetic explorations.

Sigmar Polke was recently the subject of a retrospective at Palazzo Grassi, Venice, as well as a major travelling retrospective exhibition, Alibis: Sigmar Polke 1963-2010, organised by The Museum of Modern Art in New York and Tate Modern, London. Alibis, which was also shown at Museum Ludwig in Cologne, was the first exhibition encompassing Polke’s work in all media from throughout his career. Since the late 1960s Polke has been the subject of numerous museum exhibitions worldwide and was a featured artist multiple times in documenta and the Venice Biennale. Polke was the recipient of several prestigious awards and honours, including the Praemium Imperiale, Tokyo (2002); the Rubens Prize, Siegen (2007); the Roswitha Haftmann Prize, Zurich (2010); and in 2008 was elected an Honorary Member of the American Academy of Arts & Sciences. Sigmar Polke died in Cologne in 2010.

Sigmar Polke: Pour Paintings on Paper opens 13 January at Michael Werner Gallery in London and is on view through 4 March 2017. Gallery hours are Tuesday through Saturday, 10AM to 6PM. For more information please contact the gallery at press@michaelwerner.com.