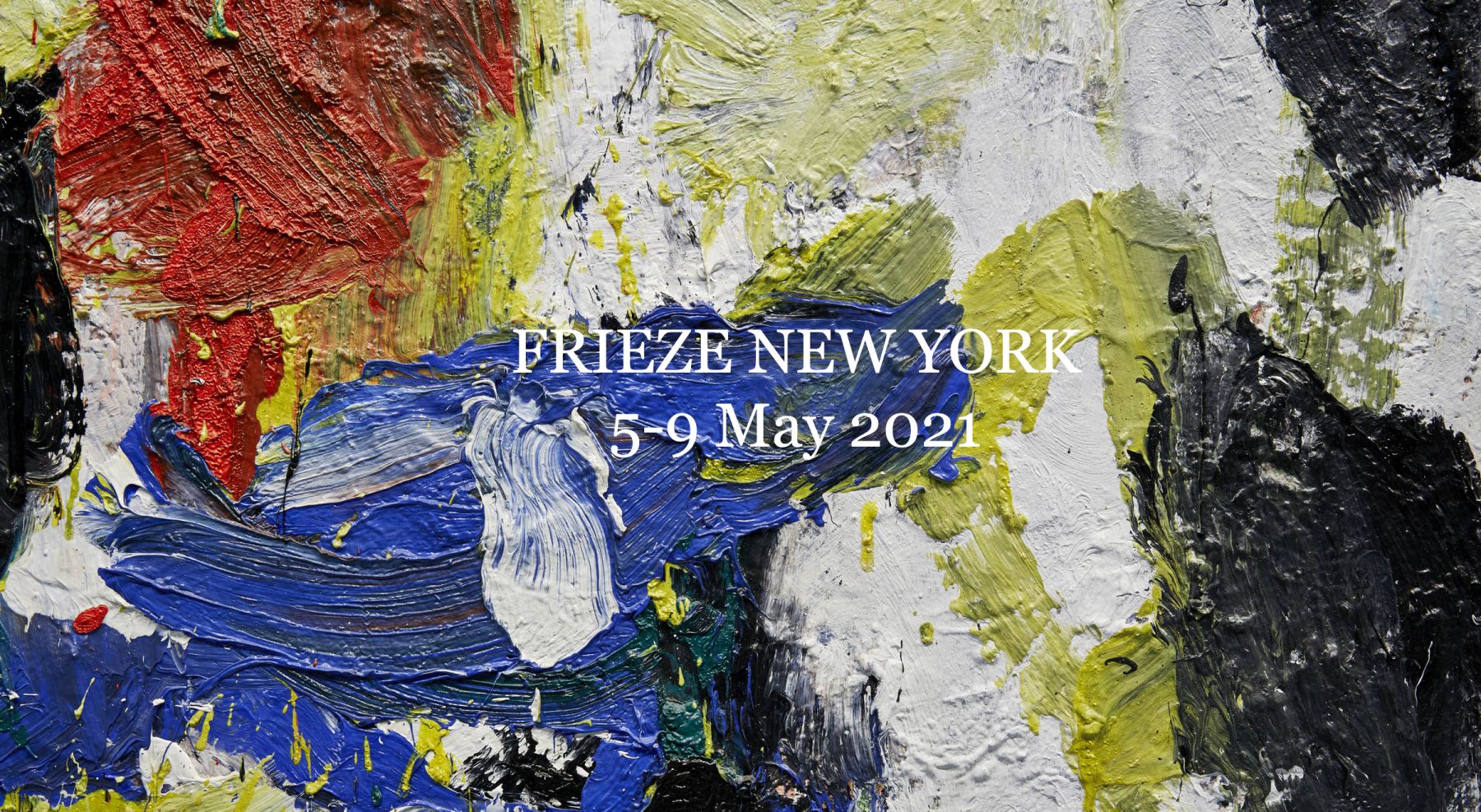 Michael Werner Gallery, New York and London is pleased to participate in Frieze New York, which will take place at The Shed in Manhattan from 5 – 9 May. For more information and visitor guidelines, please click here.

Online, the gallery is pleased to showcase a selection of works with detailed highlights. 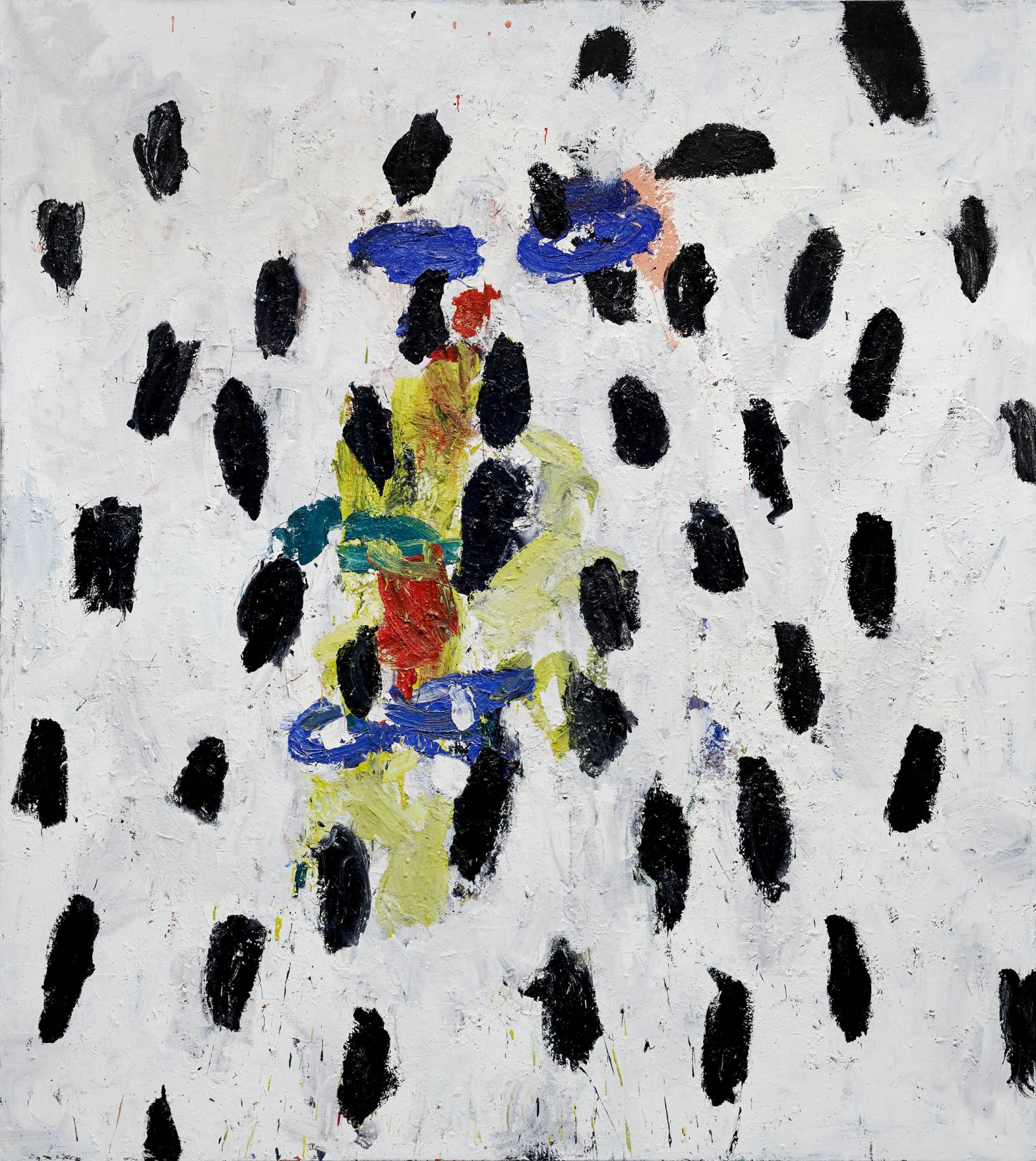 Georg Baselitz (b. 1938) is one of the most important artists of his generation. He is widely known for his inverted portraits, landscapes and still-lifes and has long cultivated a subversive approach to figurative imagery. Born Hans Georg Kern in the Saxon village of Deutschbaselitz, he adopted the name Georg Baselitz in 1961 in homage to his birthplace. Since his first exhibition in 1963 at Galerie Michael Werner in Berlin, Baselitz has been a controversial artist with a provocative and unique style.

“Ein See (A Lake)” is an important painting from a series of about thirty works that Baselitz made between 1990 and 1992. This series of paintings predates the artist’s “Remix” series and marks the beginning of Baselitz’s method of outlining – rather than inpainting – his central, upside-down figure. Since the beginning of the 1990s, Georg Baselitz had been interested in the late works of Piet Mondrian. Inspired by these paintings, Baselitz used a field of dots as a pictorial structure for this series, creating a rhythmic, primordial energy. As curator Diane Waldman explains, “The figure cannot conquer the painting. It makes a diplomatic treaty with it to create a certain type of spatial configuration… between figure and field, and among form, color, and surface [that] recalls the balanced asymmetry that Piet Mondrian achieved with his Compositions of the 1920s and 1930s.” 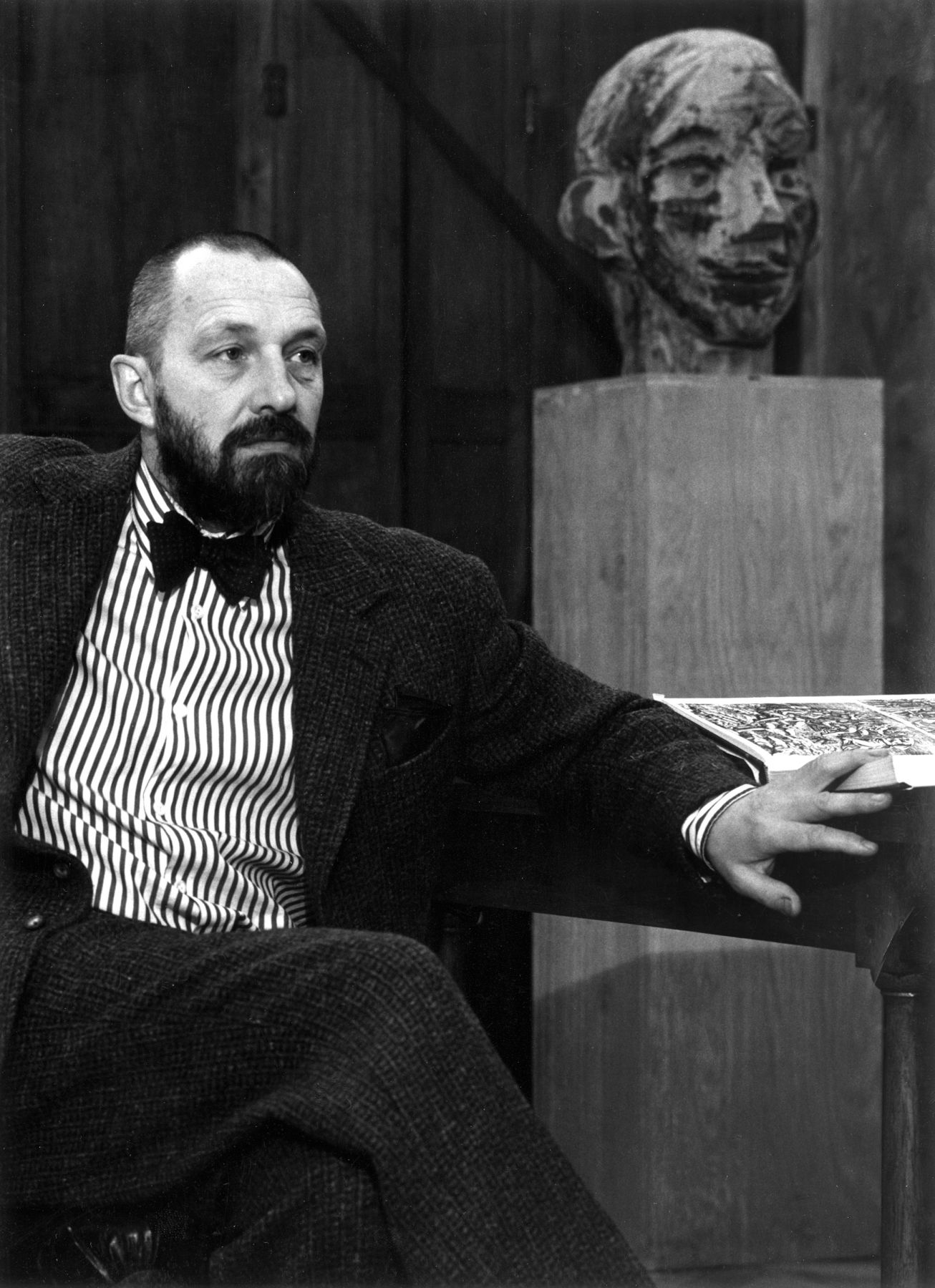 The viewer’s gaze is simultaneously enticed to ‘look through’ the composition of seemingly-floating black dots into an imaginary void, as well as ‘to focus’ on the embedded face in the foreground. However, the face in “Ein See” is only revealed vaguely as we can make out two sets of blue eyes, a red nose and green mouth, in bright primary colors. The palette of “Ein See”, with its bold contrasts and a superimposed face defined only by flecks of color, are the main signifiers of this painting, both sculptural and open at the same time.

Whereas the artist’s earlier works were characterized by a toughness in both subject and technique, this series instead utilizes loose, unexpected strokes. “A Lake” tests the limits of representational clarity and creates a dizzying spatial dynamic. Here, Baselitz renders the possibilities of movement, which brings his entire body of work into a different light. 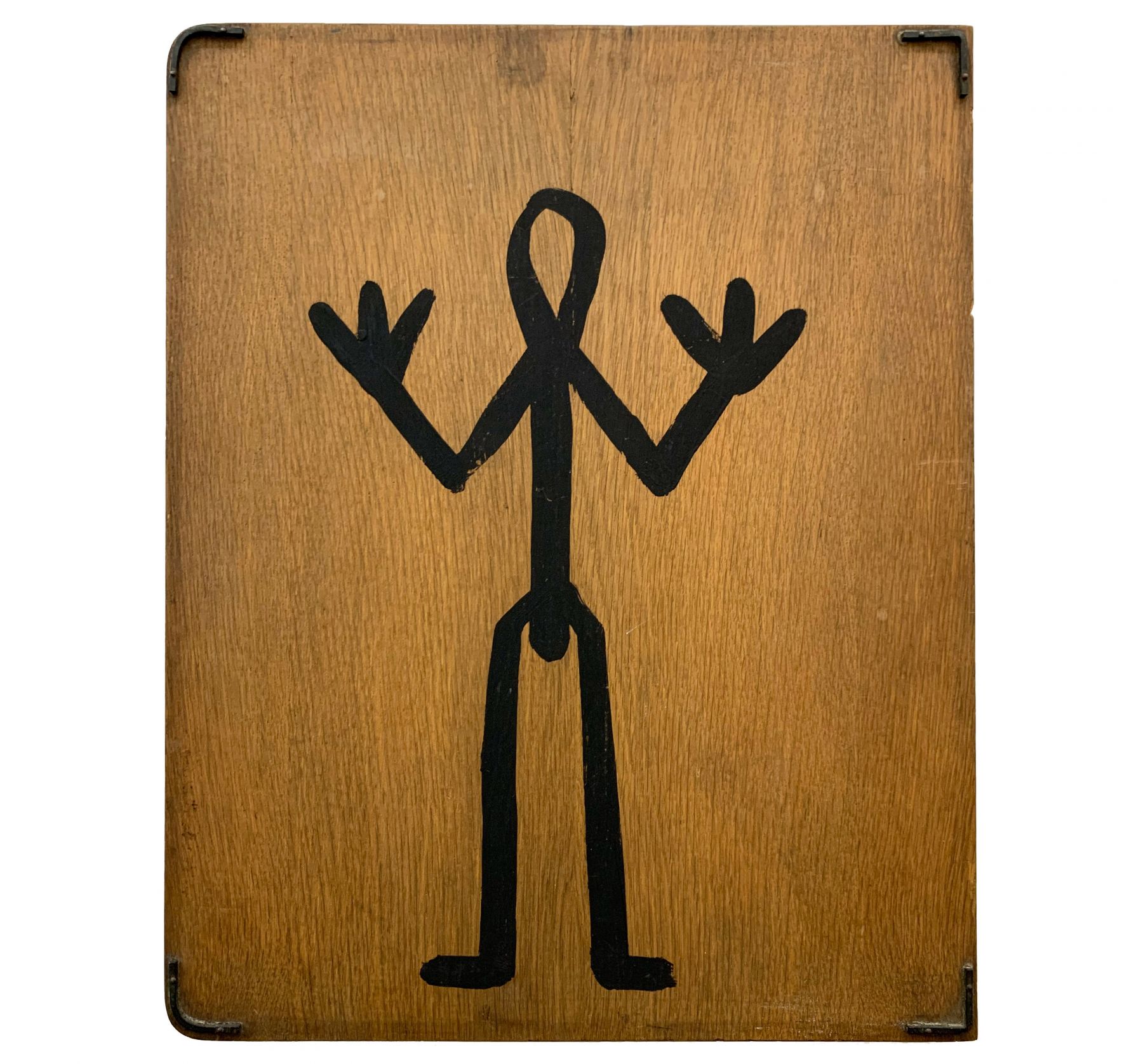 A.R. Penck (1939-2017) is one of the most important and influential artists to emerge from the post-war period. Born Ralf Winkler in Dresden, East Germany, he adopted the pseudonym “A.R. Penck” in 1968 to counter his recurring difficulties with East German authorities and to be able to show his work in West Germany. Thanks to Michael Werner and fellow artists including Georg Baselitz and Jörg Immendorff, A.R. Penck’s paintings were smuggled westward, where they caused a sensation. 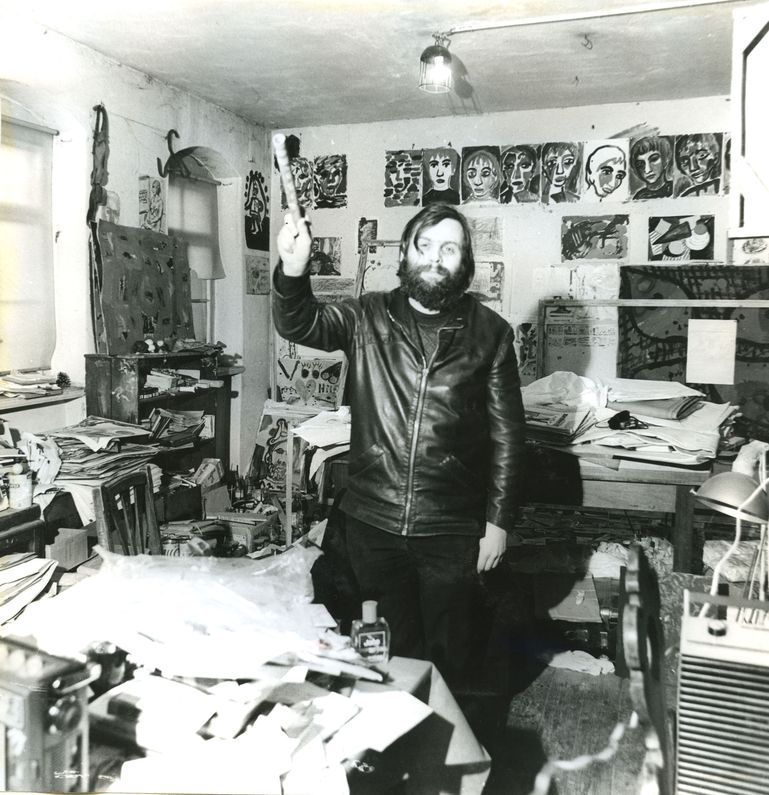 A.R. Penck’s life’s work was to create a means of visual expression capable of addressing the entire range of social and political issues facing modern man. He invented a profound and vital pictorial language during a period of political division and a looming nuclear threat. He called this language “Standart”, a neologism that combines “art” with “standard”, a German word referring to an established mode or system. Abiding interests in science fiction, cybernetics, and information architecture guided his art toward an investigation of the relationships between man and society’s pervasive systems of power, access and control.

Before the artist emigrated from East to West Germany in 1980, his range of artistic tools was dramatically compromised. Although later A.R. Penck had access to bronze foundries and the studio space to work with large canvases, the artist’s early output featured perishable materials like cardboard, plastic, aluminum, and repurposed wooden boards. “Standart”, is an important early work from a pivotal moment in the artist’s career. As art historian Annabelle Ténèze explains:

“Penck’s quest for a system of simple, effective signs took several directions. One was, at the beginning of the 1960s, the standardization of the “pin man” into a “stick figure”. It was simplified and became a flat figure with a circle for a head, hands with three fingers, and a single line for a sex. It was part of an artistic genealogy of symbolic human silhouettes that extended from those of Giacometti and the lettrist Gabriel Pomerand in the 1950s to Keith Haring’s graffiti figures in the 1980s. It became more than a signal: it became the most recognizable standard of Penck’s work.”

“A Standart is a picture insofar as it is so simple in its structure that anyone can apprehend it and imitate it. Primitiveness is not the main characteristic of a Standart; what characterises it is the operational possibility of it being grasped in terms of the effective perception and imitation of a Standart painting…. Every Standard can be imitated and reproduced and can thus become the property of every individual. What we have here is a true democratisation of art.”
-A.R. Penck