To view and inquire about available works, contact us here or visit the West Bund online site.

Online, the gallery is pleased to present a detailed look at Jörg Immendorff’s “Painter as Canvas” (1990-1991). 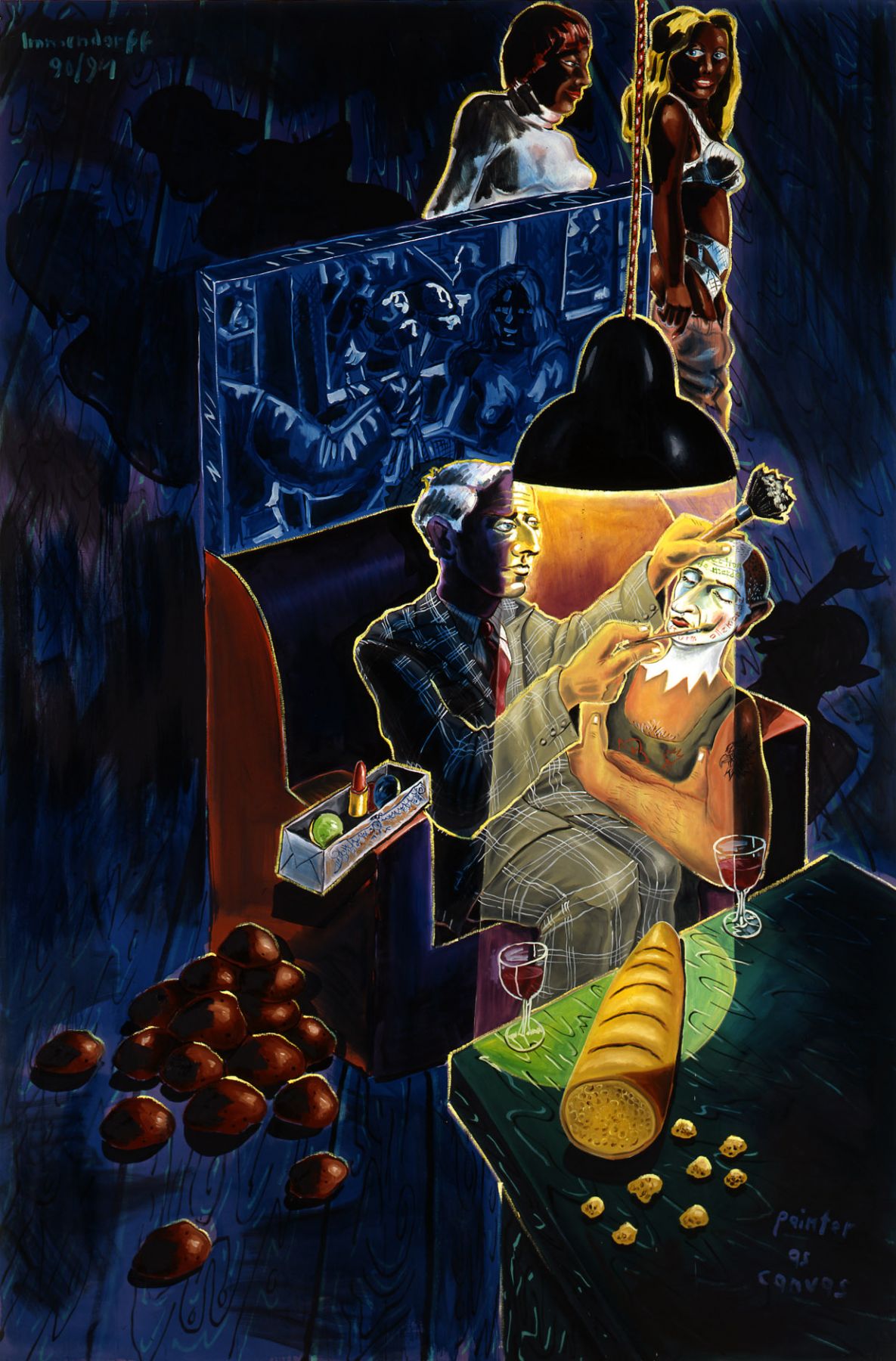 In conjunction West Bund Art & Design 2020, the gallery is pleased to present a detailed look at “Painter as Canvas”, a major work by Jörg Immendorff. Painted in the year following the fall of the Berlin Wall, this is an important work to revisit now, on the thirtieth anniversary of German reunification.

The early 1990s are a period in Immendorff’s oeuvre that uniquely address the artist’s inquiry into his identity and participation within his own paintings. The artist’s presence inside his own work should not be seen as a classical self-portrait, but more as a participation in the collective atmosphere built within the canvas. Immendorff’s art is a deep reflection on the role of the artist in an age of collective and political commitment, during a time when the artist as an individual was seen as a symbol of bourgeois conservative attitude.

In “Painter as Canvas”, we can see Jörg Immendorff sitting on the lap of his forebearer, the artist Max Ernst. For Immendorff, the use of art as a tool for self-analysis and emancipation is key, and can be seen here in his role-playing as an infant, while his physique, in contrast, is that of an adult. Ernst illustrates various expressions like “Sturm” and “allemande” and “inspection de merde” onto Immendorff’s whitened face. Immendorff’s makeup recalls the 1943 French film “Les enfants du paradis”: a masterpiece of irony and tragedy, and filmed under extreme political restriction, the film’s five protagonists are by fate bound together for life, and the figure “Garance” loses himself off-stage in his Pierrot costume.

Installation view: “For All Beloved in the World”, Reina Sofia, Madrid, 2019 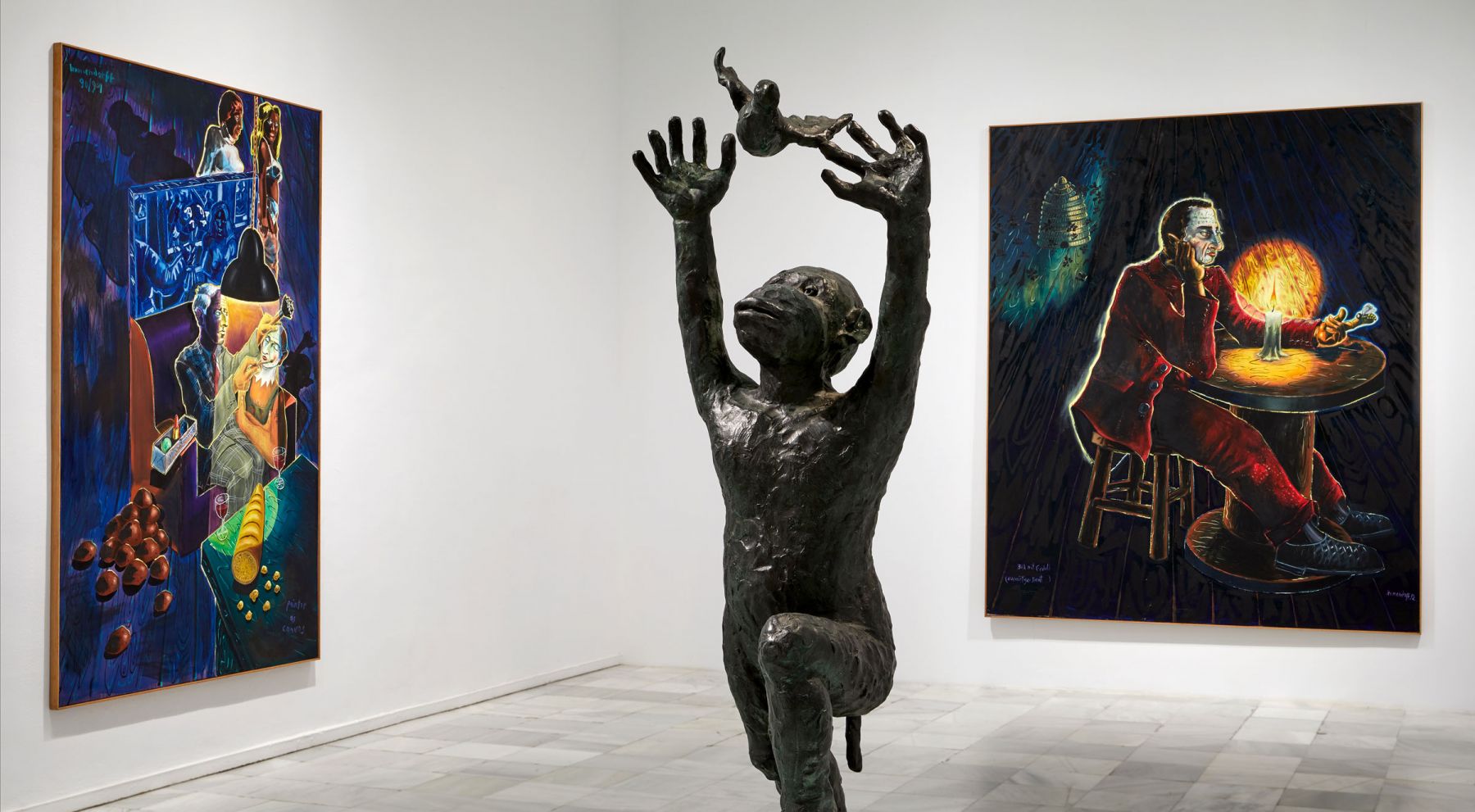 Installation view: “For All Beloved in the World”, Museo Reina Sofia, Madrid, 2019.

“What fascinated me about the theater in the past was first of all the form of protection: a very small room that you can make disappear behind a curtain. But then also the stepping in front of the audience, the offensive, extroverted aspects of the role play. When I worked as a nude model for drawing classes, the offensive and the subsequent withdrawal also played a role. And how from this you can develop a strength for yourself in order to develop a sense of security. The stage has never lost its fascination for me, not even when, as a painter, I was able to be everything in one person, i.e. to be director and actor at the same time, to be able to determine what the surroundings look like and who or what sits, stands or lies and where. The desire to do the stage design for “Elektra” came from this freedom. Not because I assumed that it could bring me more artistically than my pictures, it was more of a kind of memory, because I had never done a stage design. As a student I was just an extra and pantomime dancer and wanted to experience what it is like to design a stage space, how to “make” a picture that is three-dimensional and in which people also act. The opera was perhaps more sympathetic to me than a play, because the opera singer operates in a more contradictory and abstract manner than an actor who puts himself in a role and then plays it. That's too realistic for me, however good the piece may be.” 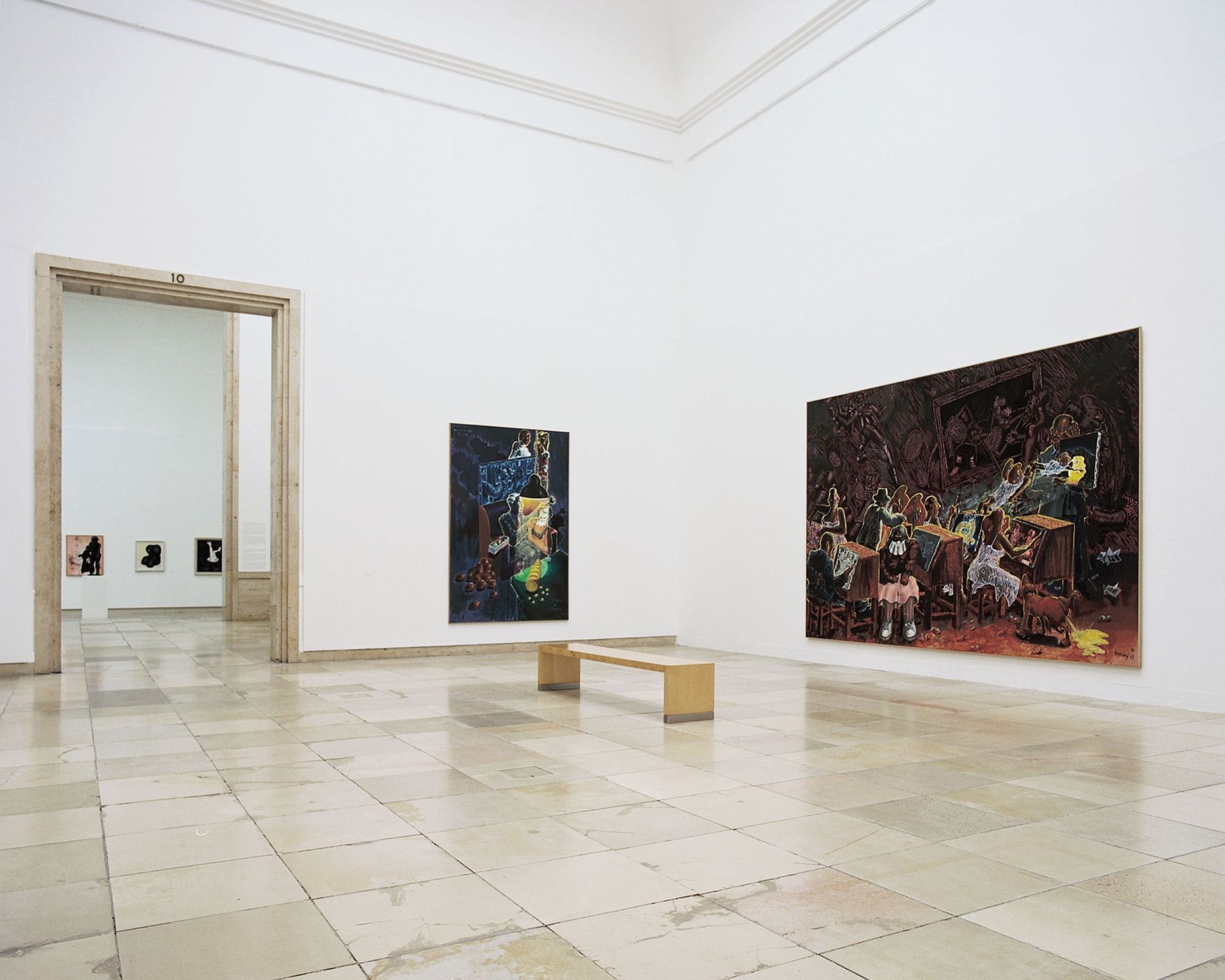 Installation view: “For All Beloved in the World”, Haus der Kunst, Munich, 2018.

“Painter as Canvas” evokes a stage, with another scene – a dream or allegory – in the background hovering above the pair. The set-up of the settee and table with two wine glasses is typical for the iconic “Café” series of the artist, while in the foreground to the left we can see a heap of potatoes, a direct link to Immendorffs early work “ Die Kunst muss die Funktion der Kartoffel übernehmen.” Art needs to be as vital, nurturing and ubiquitous as the role of the potato in society in order to create meaningful and lasting societal change.

I knew about Brecht before I went to Beuys. I spent three semesters with the stage designer, Teo Otto, who at that time was world famous, and had worked in Zürich, in the Scala, with Reinhardt and with Brecht, about whom he often spoke enthusiastically and whom I was also reading. But then I switched to Beuys. The scene and the spatial aspects I found interesting and also the view from the stage into the audience, this turning things around and being after all part of the audience.

The red sofa, in Immendorff’s vocabulary a ready-made, is at the same time an illuminated floating island in the blue waves of a timeless void with harsh shades that mark the space outside of the actual scene, as well as a nod to Lucian Freud. We feel we are observing a dream sequence in which the artist serenely opens himself up to his own vulnerabilities and enters the subconsciousness. 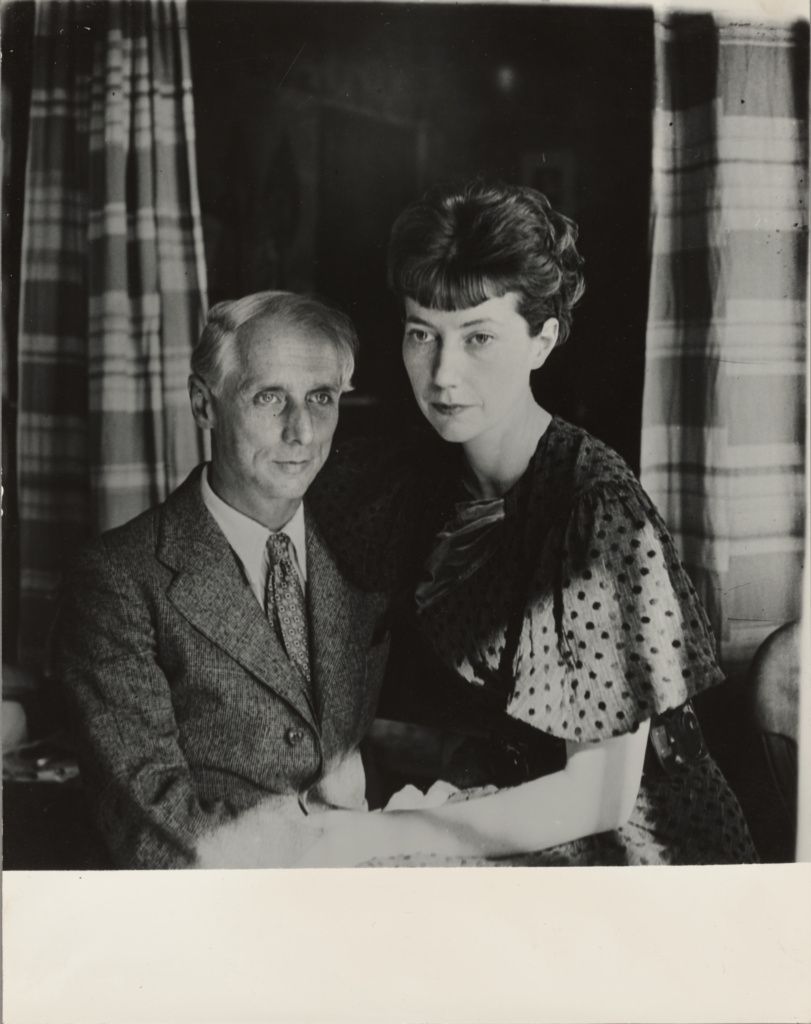 Max Ernst’s presence in “Painter as Canvas” provides further insight. A German born artist, pioneer of Dada and an important figure of the Surrealist movement, Ernst emigrated to Paris in 1922 after World War I. After spending over a decade in the US from 1941 through about 1953 due to the Second World War, he returned to the French capital until his death in 1976. There are many parallels between the two artists, personal as well as artistic. The adaptation of Ernst as a father figure, accosting Immendorff is an homage to the elder, while at the same time embedding Immendorff in the tradition of the European Boheme and paying tribute to the political turmoil and artistic accomplishments of the Moderne.

1990, the year this painting was created, is the year of the German reunification. The year marked a major shift in the Cold War policies that had dominated Europe since the end of the war, and this is a topic that has been central to Immendorff’s work from the beginning. We can understand this Café setting as a world stage placed in Paris, the Metropolis and birthplace of modern art. It looks out to the renewal of modernity and Immendorff’s aspirations to take the reins and move the world forward into the future. 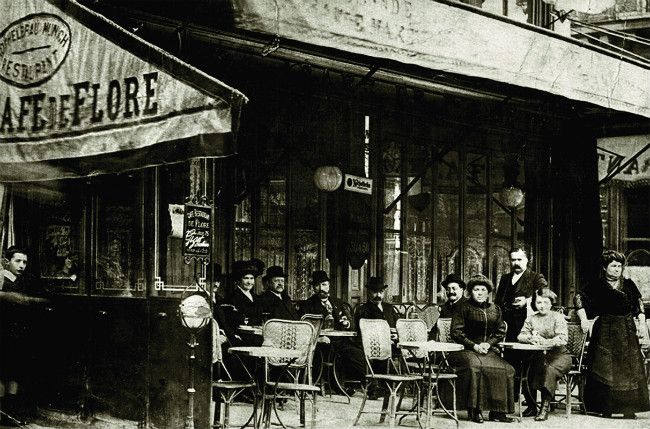 Jörg Immendorff (1945-2007) is one of the most influential German artists of the 20th Century, known for a body of work that challenged both artistic and political establishments. After Jörg Immendorff initially studied set design with Teo Otto at the Staatliche Kunstakademie in Dusseldorf for two years, he switched to the class of Joseph Beuys in 1964. During the turbulent time of student unrest, Immendorff used painting in connection with his actions - performance art and installations he grouped under the term  LIDL - which eventually led to an uproar and the artist leaving the academy abruptly in 1969. Immendorff achieved his artistic breakthrough in 1977 with the iconic “Café Deutschland” series, in which he was able to symbolically depict the historical situation of his country. The painted objects he had already used in his actions now grew into monumental sculptures. Following the reunification of Germany that he had prefigured in his work, Immendorff focused even more strongly on the question of the artist's point of view, visually presenting the “world question” in the form of paintings. The “Café de Flore” series became the starting point for this exploration in 1990, while the artist’s late paintings depict an amalgamation of iconic art historical motifs that have influenced the artist’s life and career.

Since the mid-1960s Immendorff exhibited regularly throughout Germany. Early on, he participated in documenta V in 1972, and was included in the Venice Biennial in 1976. From that time gained further exposure throughout Europe and internationally. Important exhibitions include Haus der Kunst, Munich; Reina Sofia, Mardrid; Museum Boymans-van Beuningen, Rotterdam; Municipal Museum, The Hague; Museo Rufino Tamayo, Mexico City; Kunstmuseum, Bonn; Kunsthalle Düsseldorf; Neue Nationalgalerie, Berlin; and Van Abbemuseum, Eindhoven, among many others. In 2007 Museum Kunst Palast, Düsseldorf organised a sweeping survey of the artist’s drawings. Immendorff began teaching as a professor at the Staatlichen Kunstakademie Düsseldorf in 1996. In 1998 he was awarded the highly distinguished Order of Merit from the Federal Republic of Germany. Immendorff lived and worked in Düsseldorf and Hamburg until his death in 2007.

“I become horrified when I think about my beginning and my end; I have to suppress that immediately but it's there as a big bracket. Basically, I even had this feeling as a young student, which I expressed in statements on two collages enclosed in separate glass frames. I wrote, ‘Please compare my works with those of Beckmann, Picasso, Dali…’ I had barely begun to draw, let alone paint pictures, and yet already sensed and preoccupied myself with the end. But not as though I was preparing my grave site, but more as a tension, simply as a ‘throw.’ I believe that you throw something into the future and proclaim it.” 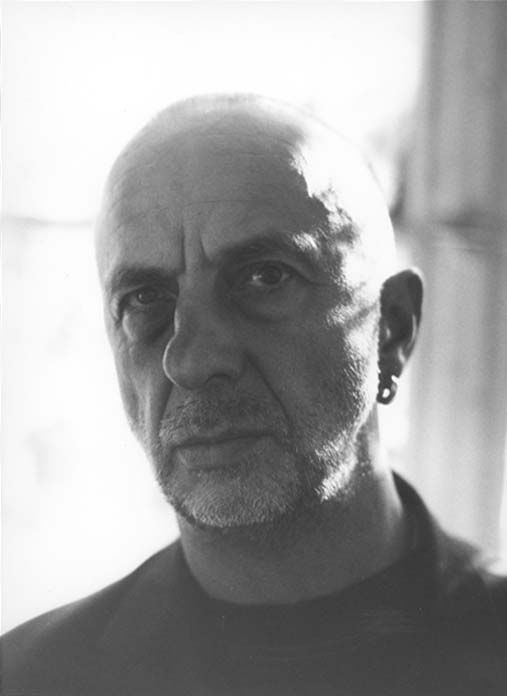 Inquire
Back To Top