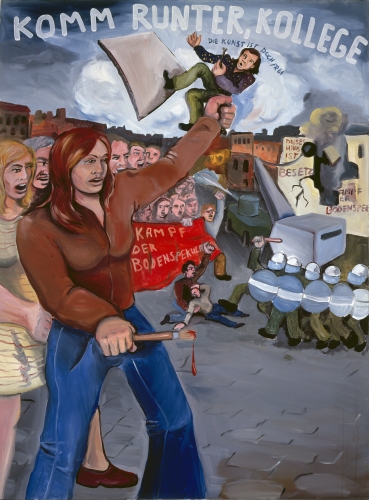 Michael Werner Gallery presents an exhibition of Jörg Immendorff's Maoist Paintings from the early nineteen seventies. This historical exhibition is a rare occasion to see an important body of work by the late German artist.

In 1970 Jörg Immendorff joined the League Against Imperialism, pledging henceforth to direct his creative endeavors to the service of the German Maoist party. Disillusioned by the outcome of European political events of the late nineteen sixties, and increasingly dissatisfied with his role as an artist, Immendorff sought to produce paintings for and about the working masses. The Maoist Paintings attack capitalism and the domination of the proletariat, expose and question the clash of aesthetic interest with political commitment, and refute the clichés and myths of avant-garde art production. In contrast to Immendorff's playfully anarchic paintings and actions of the previous decade, his works of the early seventies illustrate the artist's intense exploration into the possible melding of aesthetic and political aims. The Maoist Paintings are also deeply personal occasions for Immendorff to boldly question his artistic motives and desires.

Political issues and the role of the individual in society and in history were important themes for the artist throughout his career. "The Café Deutschland" series, which Immendorff began in the late seventies and continued for several years, addressed questions around German identity and world history. The series met with great critical acclaim and was featured in the artist's first major museum exhibition, at Kunsthalle Düsseldorf, and later at documenta VII, in 1982. In his later series "Café de Flore", Immendorff further explored his thoughts on politics, his country, art and the world in general. The Rake's Progress, a series of paintings and drawings begun in the 1990s, was inspired by William Hogarth's 18th century etchings parodying a Christian morality play; in Immendorff's version, significant figures from his life and work portray the various characters in the play.

Exhibitions of Immendorff's work have traveled throughout Europe, Asia and the United States, and include major one-person exhibitions at Museum Boymans-van Beuningen, Rotterdam; Municipal Museum, The Hague; Museo Rufino Tamayo, Mexico City; Kuntsmuseum, Bonn; Kunsthalle Düsseldorf; Neue Nationalgalerie, Berlin; and The Arts Club of Chicago, to name a few. The artist received the Order of Merit from the Federal Republic of Germany in 1998. He lived and worked in Düsseldorf until his death in 2007.

Maoist Paintings: The Early Seventies is on view from 29 October 2009 through 30 January 2010. Gallery hours are Monday through Saturday from 10AM to 6PM. For more information, please contact press@michaelwerner.com.