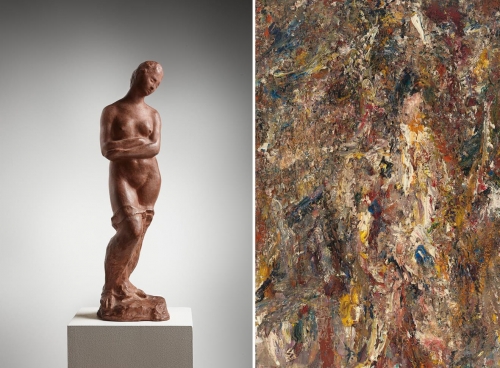 Michael Werner Gallery is pleased to present Lehmbruck/Leroy at our East Hampton gallery. This exhibition offers a rare opportunity to view the sculpture of German artist Wilhelm Lehmbruck (1881-1919) alongside the paintings and drawings of French artist Eugène Leroy (1910-2000). From different countries and generations, both artists simultaneously pay homage to and break free from classical traditions in art.

Wilhelm Lehmbruck was a quintessentially modern artist. He greatly admired the French sculptor Auguste Rodin but moved beyond Rodin’s naturalistic depictions of the human body to create elongated, melancholic, figurative sculpture for the 20th century. Departing from the traditional sculpting materials of bronze and marble, Lehmbruck used newly developed building materials such as cast stone. After his untimely death, his work was considered “degenerate” by the Nazis but became a great influence on many artists including Joseph Beuys, who recognized the potential for his own work in the sculpture of Lehmbruck. Beuys said, “his sculptures cannot basically be comprehended in visual terms. One can only comprehend them by way of intuition whereby completely different sense-organs open up... In other words, his sculptures contain categories that never previously existed.”

Throughout his life, Eugène Leroy painted classical subjects such as still-lifes, self-portraits, and the human figure. Drawing from figures from the history of painting, especially Giorgione, Rembrandt, and Hugo van der Goes, Leroy labored over paintings for many years. He built layers upon layers of paint until the subjects are obfuscated, only recognizable through painted glints of light. On view in the exhibition will be drawings and paintings of the human figure.  The critic Barry Schwabsky said, “his paintings show no concern with either the flesh or its form but only with what might be called a flash of illumination in which both flesh and form are at once dissolved and memorialized.”

Lehmbruck studied at the Düsseldorf Academy of Art from 1901 to 1906 before moving to Paris in 1910. He participated in the Armory Show in New York in 1913. With the threat of war, Lehmbruck fled Paris for Berlin in 1914. He served as a paramedic in World War I from 1915 to 1916 before escaping to Zürich. Suffering from severe depression, he committed suicide in 1919. Major sculptures by Lehmbruck are in museum collections worldwide, including Museum of Modern Art, New York; National Gallery of Art, Washington, D.C.; Tate Gallery, London; Städel Museum, Frankfurt, and the Lehmbruck Museum, Duisburg. Lehmbruck’s 1911 bronze “Die Kniende (Kneeling Woman)” was installed in the entrance hall of the first documenta in Kassel in 1955.

Leroy lived most of his life in Tourcoing, France, near the Belgian border. Works by Leroy are in major American and European collections and have been exhibited at the Musée d’Art moderne de la Ville de Paris; Stedlijk Van Abbemuseum, Eindhoven; Albright-Knox Art Gallery, Buffalo; and  Musée d’Art moderne et d’Art contemporain, Nice. He took part in documenta IX in Kassel in 1992 and in the Venice Biennale in 1995. The Musée Beaux Arts Tourcoing was renamed MUba Eugène Leroy in honor of the painter in 2010.

Lehmbruck/Leroy will be on view beginning Friday, 16 April. Our East Hampton gallery is open Thursday through Sunday from 11am to 5pm. The safety of our staff and visitors is our top priority. We ask that you respect social distancing guidelines and wear a mask at all times.

For more information regarding the exhibition, please contact the gallery at press@michaelwerner.com.