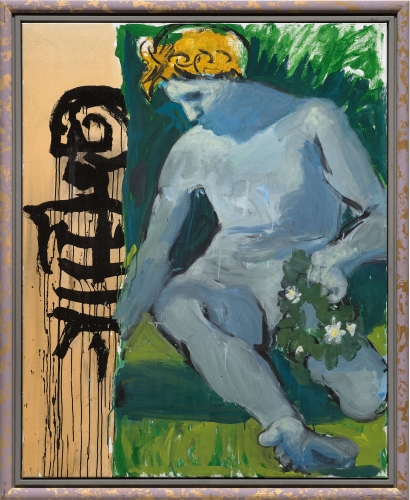 Michael Werner Gallery, New York is pleased to present an exhibition of new paintings by Markus Lüpertz. The exhibition opens alongside two simultaneous museum retrospectives – the artist’s first in the United States – presented at the Hirshhorn Museum and the Phillips Collection in Washington, DC.

Arcadia is the central theme of this latest exhibition at Michael Werner, which comprises over two dozen paintings completed in 2016 and 2017. Inspired by this Edenic, pastoral motif and its recurrence throughout the canon of art history from Greek antiquity to the Renaissance, Markus Lüpertz’s “Arcadia” Series depicts a confluence of classical forms and mythical figures. His paintings of nudes, skulls, and still-lifes, along with images of centaurs and muses, place Lüpertz among such diverse artists as Nicolas Poussin, Pierre Puvis de Chavannes, and Hans von Marées as he continues to reinvent classicism and engage with tradition.

Markus Lüpertz (b. 1941, Liberec, Bohemia) is a highly accomplished painter and sculptor and has been exhibiting his work worldwide for over fifty years. He entered the art academy in Krefeld, Germany, at the age of fifteen and later also studied in Düsseldorf. From the time of his first exhibition with Michael Werner, in Berlin in 1968, Lüpertz was already a forceful presence in German art. He frequently exhibited in Cologne and Berlin before breaking onto the international scene in 1977 with a major museum exhibition at the Stedelijk in Amsterdam. Lüpertz participated in the legendary 1980 exhibition A New Spirit in Painting at London’s Royal Academy and was an important contributor to the controversial Zeitgeist exhibition in Berlin the following year. Lüpertz served as director of Kunstakademie Düsseldorf from 1987 to 2009 and is the recipient of numerous awards, including the Villa Romana Prize, the German Critics Association Prize, and the Julio González prize. In recent years important retrospective surveys of the artist’s work have been shown at Kunst- und Austellungshalle der Bundesrepublik Deutschland, Bonn (2009); Gemeentemuseum, The Hague (2011); Museo de Bellas Artes, Bilbao (2014); and The Hermitage State Museum, St. Petersburg (2014).

At the Hirshhorn Museum and Sculpture Garden, Markus Lüpertz: Threads of History (24 May through 10 September) examines the early years of the artist’s mature practice, exploring his unique reconsideration of painting through the lenses of Abstract Expressionism, Pop art and German postwar culture. Simultaneously, the Phillips Collection (27 May through 3 September) presents a comprehensive survey exhibition of Lüpertz’s work in all media, from his most recent paintings and back to his works of the 1960s. With a combined selection of nearly 100 works the Hirshhorn and Phillips exhibitions offer American audiences a rare and in-depth assessment of one of Europe’s most important post-war artists.

New Paintings opens on 18 May at Michael Werner Gallery in New York with a reception for the artist and remains on view until 7 July. The exhibition will be accompanied by a full-color catalogue featuring a text by Richard Shiff. Gallery hours are Monday through Saturday, 10AM to 6PM. For more information, please contact the gallery at press@michaelwerner.com.